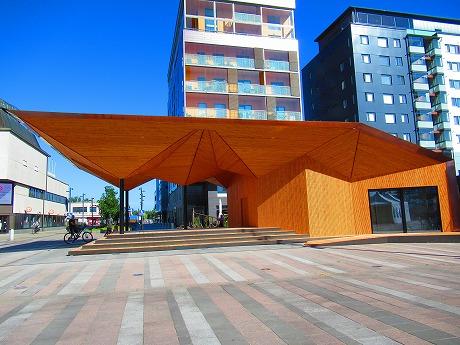 Moi!
August may be the mid-summer or summer vacation month in other countries. But the summer vacation has finished and a new school year has already started in Finland. We enjoy picking up berries, mushrooms or harvesting other fruits or vegetables now.

Well, I would like to write about “Toripaviljonki” (= Market Pavilion) in Central Market in Seinäjoki this time. Central Market was open in the spring of 2019. So, it is quite new. We are in the process to cultivate the market culture. Some shops, restaurants, and bars opened just before or after Central Market completed. During the summertime many people enjoy talking, drinking coffee or eating ice cream there. Of course some people come to buy fresh fruits or vegetables.

Addition to that some events were also organized. Yes, we also had a Christmas Market.

And finally, Market Pavilion was open on 13.8.2022! You may be wondering what is a pavilion. This Market Pavilion is mainly used as a stage. The city plans to revitalize the city by making Central Market in the centre of the city as a first step, building apartments and shops and restaurants around it as a next step and then creating this pavilion. Though the pavilion was planned to open in June, the construction work had to be delayed due to the lack of materials.
Many people came to see the new Market Pavilion and what was happening there on that day.

For example, a magic show attracted many children.

A concert was also held. For example, Susanna Erkinheimo who is from Laihia (About a 1-hour drive from Seinäjoki). She is famous as a winner of Voice of Finland. Her voice was strong and beautiful. People (including me) enjoyed it.

I took a photo from the side of the pavilion. I have visited some markets in other cities in Finland, but I haven’t seen such a modern and well-designed pavilion. It is designed by Oopeaa which office is in Seinäjoki. Woods are often used in their designs. I was amazed by the beautiful combination of woods.

I visited there again on the next morning of the opening because it was better weather than opening day. Many people already enjoyed coffee seeing a new modern pavilion.

There were many obstacles to overcome before this pavilion was completed. It is finally open, and I hope that many events will be held in the future (especially in the warm season), and that it will provide a place where many people can enjoy themselves with a smile.

If you come to Seinajoki for a trip, please take a look at this great pavilion.
Hyvää kesää tai alkusyksyä! (= Have a good summer or early autumn!)

How to Watch Live Football at SJK Seinäjoki