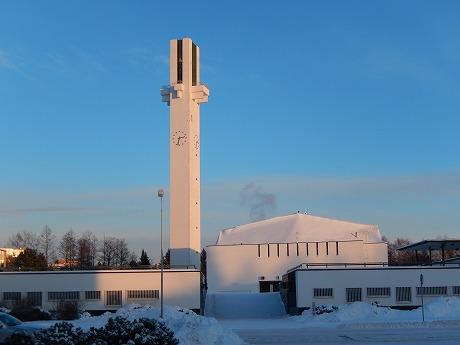 Moi!
November has been quite warm. It sometimes snows and it sometimes melts. The scenery is changeable. (By the way, the cover photo was taken before and is not the current one.) Will this Christmas be a white Christmas or a black Christmas?

Well, I would like to introduce the church in Seinäjoki – Lakeuden Risti (= Cross in the Plain). It was designed by the most famous architect in Finland – Alvar Aalto. It was built 60 years ago. Yes, it was built in 1960 and the opening ceremony was held on April 10th, 1960. We celebrated 60th anniversary of Lakeuden Risti and the establishment of Seinäjoki City with flowers. (This photo was also taken in summer. We can’t see flowers anymore.)

Since I work as a Seinäjoki local guide, I would like to explain detail of the church. Unfortunately, it would be difficult to write out all. So, I would like to explain some points. If you are interested in Seinäjoki local guide, please send a message here. New guides have joined, so we serve guide service with not only English but other languages as well.

Lakeuden Risti is the Lutheran church. It’s very simple. Some tourists who expect for gorgeous Catholic church are sometimes surprised to the simplicity.
The important factor in this church is the natural light. It differs from the time, the season or the weather.

Night light is special. The shpe of windows are like a candle in the snow. The light fittings with soft light was also designed by Alvar Aalto.

The pews are made from red-hearted pine in Northern Karelia region. There are 82 pews here and half of them were funded by donations. The edge of a pew is a shape as a cross. When you see these pews from back, it looks like the crosses are continuous.

It is easy to see all the windows were special made and each shape is different.

The cross was intentionally made simple.It was designed that natural light shines diagonally from the side so that you can face God purely.

Let’s see the organ. The length of pipes of general electropneumatic organ is getting longer little by little. But the length of them in this church is different and it looks like the aurora. Can you believe it? This organ was also designed by Alvar Aalto. The total number of pipes is 3800. The shortest one is only 1,5 cm and the longest one is 5,8 m. Though it is quite difficult to see the Northern lights here in Seinäjoki, if you come to Lakeuden Risti, surely you can see the aurora-shaped electropneumatic organ.

The tower is sometimes lighted up at the event. I took the photo below in 2017 that was the 100th anniversary of Finland’s independent. In fact, I saw the light up with 60 on the tower on Facebook but I missed to take a photo.
The tower is 65 m high and it’s a landmark here because Seinäjoki area is quite flat (= Lakeus).

The 65-metre tower was completed in three weeks by men working round the clock in 12-hour shifts. A roughly two-metre section was completed in each shift. The specialised slip casting method meant that casting could not be interrupted, and the workforce couldn’t take any breaks longer than 30 minutes. The casting process became something of a sightseeing destination for curious locals, who often came to have a look at the rapidly rising tower on their evening walks.

You can see this story from here in Visit Seinäjoki web site. I also wanted to see the casting process of the church.

A big celebration would have been held if this Covid-19 epidemic didn’t happen this year. However, the situation was better than spring, there were some small events, mass to celebrate the 60th anniversary. This church, which still impresses visitors even after 60 years, is our treasure.

Hyvää talvea! (= Have a wonderful winter!)