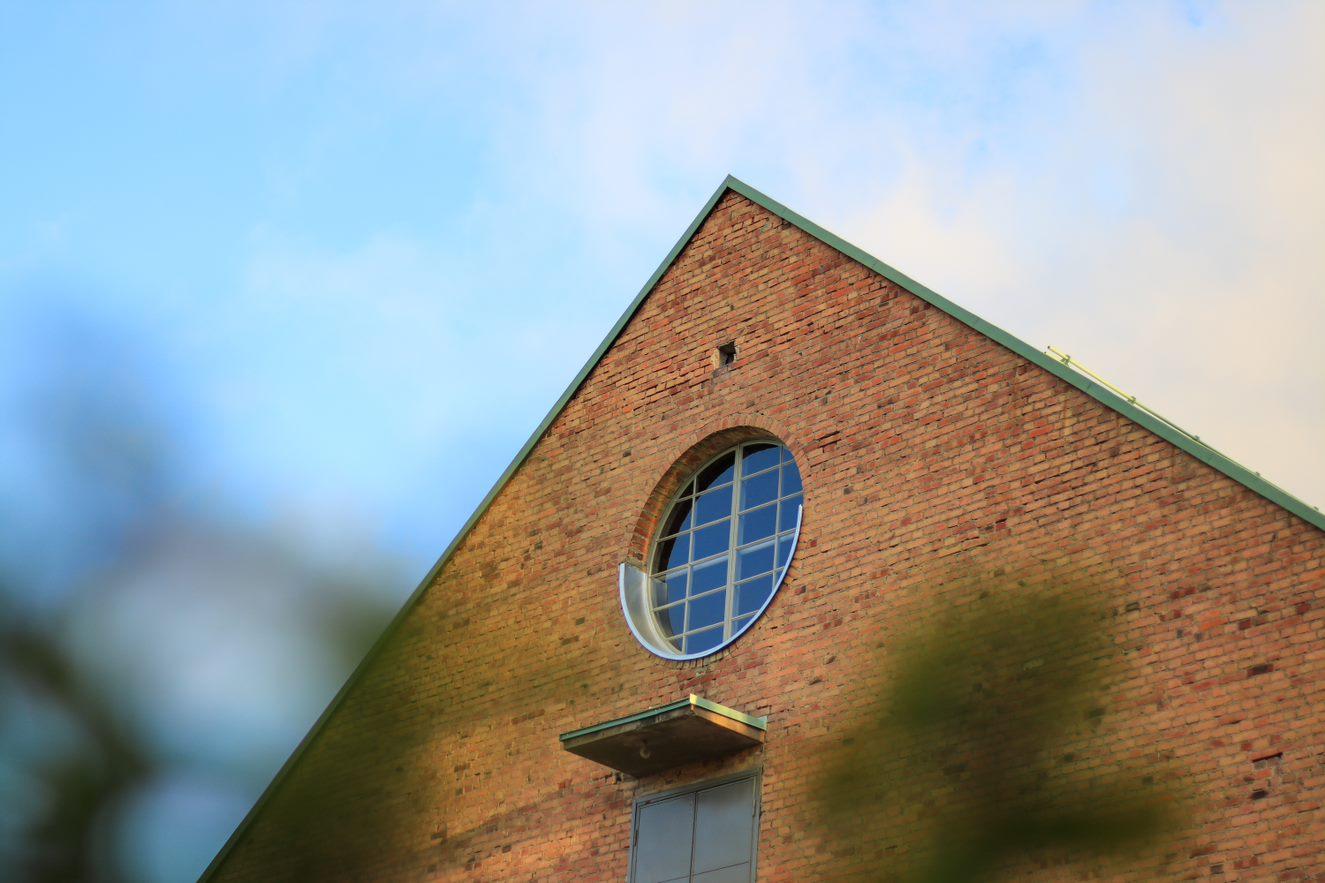 Kalevan Navetta is an versatile art- and culture centre, that offers modern art exhibitions, delicious flavours of Äärellä lunch restaurant, concerts, shopping possibilities, pleasant meeting- and event premises and wide range of events and workshops. The building of more than 4000 square meters and its gorgeous wide spaces combines modern elements and its history. Red tiles, concrete- and wood surfaces create rough and yet cozy environment as a whole.

A barn without cattle

The history of the old barn building begins from 1890’s, when Östermyra mansion went bankrupt and the farm transferred its ownership to life insurance company Kaleva and the old barn building was replaced with a new red tiled barn. However, Kaleva left its intentions to continue farming on the premises, but the name Kalevan Navetta (Kaleva’s Barn) remained in use.

In 1909 the Barn got a new owner, Hugo Grönlund, who turned the barn into baize factory. The factory produced baize and frieze and woolly blankets and engaged 135 employees at its best. In the end, the factory operations went down with the economic depression of 1920’s, after which Finnish defence forces took the barn to use as a warehouse. In fact, Finnish defence forces had the ownership until 1990’s making them the most permanent owners of the building.

Back when the baize factory ran the premises in 1910, sausage factory now known as Atria moved to its neighbour. In 2011 when Atria had already moved its production to Nurmo, the city plan of the area was re-designed. Peab oy community builder purchased the premises of old factory area as well as the Barn and built high apartments around the barn. Eventually the place was developed into Itikanmäki block surrounded with red apartment buildings reaching the skies. It was considered important all the way from the beginning that the barn building would remain at it’s place due to its important place in history. The barn was renovated in 2018 and in 2020 the Art and Culture Centre Kalevan Navetta opened its doors to the public.

One of the operators in the building is Seinäjoen taidehalli – art operator of modern day, which hosts modern art exhibitions and comprehensive additional program. The Art Hall executes wide variety of events such as art yoga and workshops for kids and seniors. Seinäjoen taidehalli has two exhibition spaces that are very different compared to each other – Halli (hall) and Vintti (attic)

Halli is a space that fits its name well as it is hall with over 500 square meters and the walls, ceiling and floor made of grey concrete. There are doors with numbers on the walls left from the times when Finnish defence forces used the building to storage their equipment.

Vintti on the other hand is a mostly wooden space with warm atmosphere on the third floor. When you come to the room, the first thing you are likely to notice is a big round window high on tile wall. The floor is made from spruce planks and the space is divided by wooden pillars on both sides of the room.

There is a lunch restaurant called Äärellä Kuppi ja Kattila on the first floor. Here as well they have combined Barn’s red tiles, natural wooden surfaces and rough concrete creating beautiful place to enjoy your meal. Lunch is served from Monday to Friday from 11am to 2pm. Lunch consists of appetizer salad, main dish and bread. On Saturdays they offer Äärellä-brunch, where you get to taste the delicious elements of seasonal menu.

Handicrafts for all ages

Taito South Ostrobotnia’ mission is to develop handicraft culture skills in the area by offering courses, workshops and events. There is a lobby on the first floor, where a lot of people of different ages can take handicraft classes. Due to its special shape, the lobby has been described as a China alley.

Taito Shop Seinäjoki is a high-quality handicraft- and giftshop, where you can find yarns, decoration items, souvenirs and much more!

The premises of Kalevan Navetta are truly unique and its details represent the history of the building. The different lifecycles of the building have been noted and respected during renovation of the building. One of the beautiful details is that they have used the iron from train tracks in many of the rooms as an impressive decoration element and also to support the building.

Hugo-hall named after Hugo Grönlund is a space with 300 square meters that is fitting for organizing concerts and other events – even weddings. The hall has gorgeous room height and distinctive style. As an interesting detail, the wooden floor is slightly flexible making the hall perfect for dancing.

Kammio that locates on the first floor fits well for organizing band training sessions, small concerts and meetings as well. Kammio has unique spruce plank floor and round shaped ceiling.