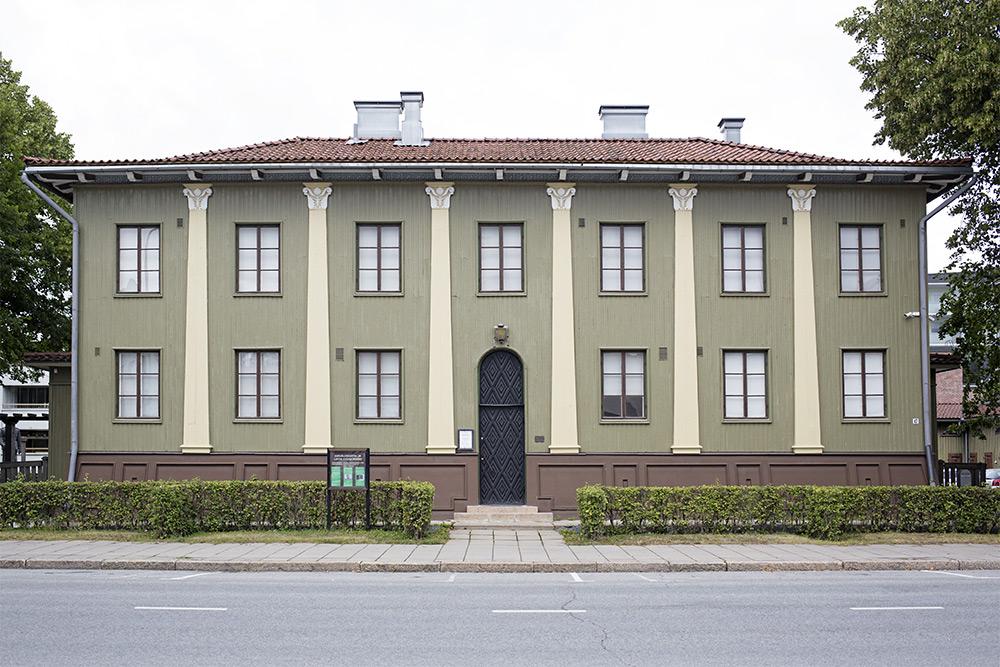 The Suojeluskunta & Lotta Svärd Museum operates in the headquarters of the South Ostrobothnia Civil Guard designed by Alvar Aalto. This three-storey building represents refined neoclassicism and includes features from functionalism and Ostrobothnian building traditions. Some of the interiors, furniture, light fittings and decorative details were also designed by Aalto. In addition to the main building, Aalto’s design includes the two-storey brick outdoor building, the wooden shed and the pergola. The buildings and the yard were assigned protected building status in 2002. One of the reasons for the decision was that the interiors of the main building still retain some of the original 1925 materials and paint surfaces. The Suojeluskuntalainen statue represents a civil guard and was sculpted by Professor Pentti Papinaho. The main building houses exhibition and meeting rooms, an information point and a museum shop. The outbuilding has further exhibition spaces and the museum’s back office.

It is a summery June day in the year 1960. The air feels a little fresher following a severe thunderstorm. Anneli hops over puddles. She stops and looks up at the Southern Ostrobothnia Civil Guard Headquarters. Anneli knows that the building is an early work by Alvar Aalto. She recalls that the building was finished in 1925, a few years after Aalto became an architect. And back then the architect had no idea how famous he would become, Anneli thinks in her head.

For years Anneli has admired the proud, new-classic air of this three-storey building. She also sees features of Ostrobothnian building traditions in the building. Anneli has been inside the building and knows that some of its interiors, furniture and lighting were designed by Aalto himself.

At the corner of the building, Anneli takes a few steps toward the courtyard. Her gaze circles around the two-storey brick building, wooden shed and pergola in the courtyard. She knows that they were also designed by Aalto.

Anneli continues on her way along the uneven gravel road. It is peaceful. She passes two cyclists, a farmer with his horse and cart, and a rumbling truck going the other way. From up ahead comes the whistle of a train leaving the station. Anneli has heard that the junction station formed by the railways of her hometown is called the “mother of Seinäjoki”.

The railway station has caused the community’s residences and centre to shift from the Törnävä area to the area around the station. Now even the old church is too far from its parishioners

Anneli stops and gazes at the broad, green landscape of fields around the new church that was just consecrated in April. The bell tower of Lakeuden Risti (‘Cross of the Plain’) rises high and strong above the South-Ostrobothnian plain. Anneli thinks that the houses at the edges of the fields look like play-houses compared to the church.

Anneli opens the church’s heavy front door and steps inside. Light falls through the windows in the door, reaching the open door of the church hall. Anneli stops and looks around, awestruck. In front of her, the grand, spacious and bright cathedral opens up. She starts to slowly walk toward the altar.

Anneli finds it almost unfathomable that such a magnificent church can have been built in her home town, Seinäjoki, with its nickname ‘Mud Town.’ Even if the town didn’t get the cathedral chapter. She is glad that the design of the world-renowned architect Alvar Aalto was implemented in the end, even though the design by Aalto’s office did not follow all of the competition rules. Anneli has become acquainted with the works of Alvar Aalto thanks to the newspapers and has begun to admire his reductionist form language. (the story continues after the illustration) 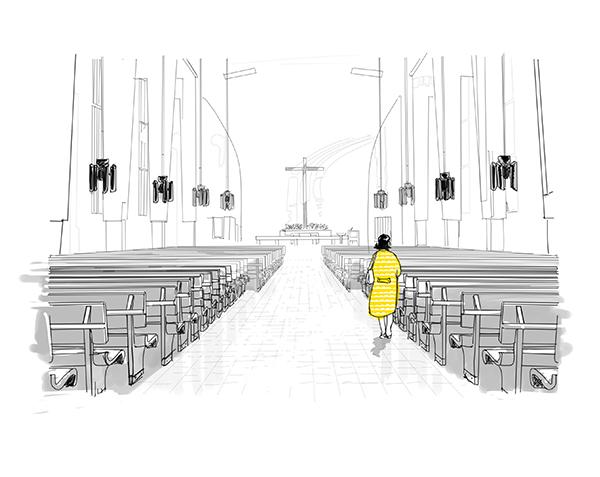 The modern style of building churches stirred up murmurs in Finland among the regular folk as well as widely among the clergy of our country. And the style of the church being built didn’t appeal to everyone in Seinäjoki, either. Moreover, the poverty of the congregation was a difficult issue during various phases of the church’s construction. It was even thought that perhaps erecting the bell tower should be given up due to lack of funds. The parish council didn’t want to further anger the members of the congregation who were sceptical of the church’s construction, and the church tax was not increased. They wished to fund the construction work through loans, voluntary contributions and donations. Alvar Aalto’s idea of covering the outside of the church in black granite was abandoned before work even began.

Anneli stops beside a pew made of red heart pine, touches its smooth surface, sits down and realises that the pew is unusually nice. Sitting here feels completely different from sitting on the slanting old church pews. She is glad that she has also been able to play a minute part in the building of the church. Anneli is one of many who donated to fund the church pews. Over half of the pews were acquired with donated funds. Even Seinäjoki’s schoolchildren participated in the fund-raising.

In spite of opposition, the church and its tower were completed. Anneli knows a carpenter and has heard how much fondness the carpenters feel for their achievement. Building the church was quite demanding. Construction of the bell tower went on around the clock for three weeks under difficult conditions. The quality and punctuality of the work were important to the men, however, and so the carpenters even competed with one another over how much they could get done during their 12-hour work sessions.

Anneli continues her walk toward the altar. She stops by a plain cross designed by Aalto. The cross functions as an altarpiece. The architect was of the opinion that there were quite enough overdecorated churches and schooled his critics: ‘That which is accepted quickly and easily is cheap. Time will make Lakeuden Risti into an Ostrobothnian church and into the Ostrobothnians’ church.’

Anneli’s purpose on this visit to the church is to see the baptismal font, since her first-born will soon be baptised there. She finds that the intimate size of the chapel creates an interesting contrast to the festivity of the church hall. A soft bluish light filters through the stained-glass window called ‘The flow of life,’ which was designed by Aalto. Anneli strokes the edge of Aalto’s silver baptismal font and realises that acquiring this also required donations from regular people. She is moved by the fact that the famous architect has truly designed everything for our congregation, from the church textiles to the candle-holders and altar vessels. She heard that he drew many individual items on pieces of paper on the spot while visiting the work site.

• An early work by Alvar Aalto, epitomising new classicism, from 1925.

• Aalto designed some of the building’s interiors, furniture, lighting and other details.

• The building has been preserved in its original condition. Currently it houses the Civil Guard and Lotta Svärd Museum. The building is managed by the Provincial Museum of Southern Ostrobothnia.

• The outbuildings hold exhibition and meeting spaces, an info booth and museum store.

• The buildings along with the yard were protected by a building protection law in 2002.